Christina Aguilera's boyfriend Matthew Rutler is 'happy with her body', whatever her weight. 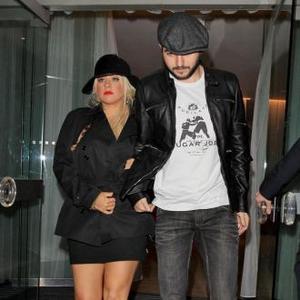 Christina Aguilera's boyfriend is ''happy with her body''.

The 31-year-old actress is known for her fluctuating weight, but Matthew Rutler - who she met on the set of 'Burlesque' in 2010 - thinks she looks great, whatever her shape.

A source said: ''Matt is happy with the way she looks, however it is. Even when she was looking heavier, he would always say, 'She looks gorgeous to me'.''

The couple got together shortly after Christina ended her five-year marriage to Jordan Bratman, and a friend claims no one expected their year-long relationship to become so serious.

The insider said: ''We thought it was going to be a quick, seat-of-your-pants romance, [but] it's turned into something special.''

A driving force behind their success is believed to be Matthew's Bond with Christina and Jordan's four-year-old son Max.

Talking to US Weekly, the source continued: ''He recently surprised them by taking them to Cirque Du Soleil's Iris show. They had a blast.''

Christina debuted her new slim-line figure last week on 'The Voice', along with with a toned-down style makeover. However, she insists she no longer cares what anyone has to say about her looks.

''Being too thin. Being bigger ... It's noise I block out automatically. I love my body. My boyfriend loves my body. My son is healthy and happy, so that's all that matters to me.''