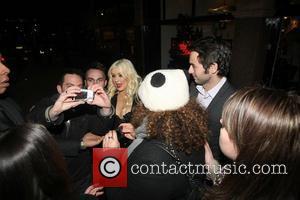 Picture: Christina Aguilera poses for a photograph with fans as her boyfriend Matt Rutler looks on after leaving the Stephen Webster jewlery store London, England -...

Christina Aguilera is planning a massive end-of-the-year party so she can double up her New Year's Eve and 30th birthday celebrations.
The Dirrty hitmaker turned 30 on 18 December (10) but was too busy promoting new movie Burlesque to celebrate with family and friends - so she's planning to turn New Year's Eve into a belated birthday bash.
She says. "My actual birthday was in December and I turned 30! It was a big one - the next chapter of my life. But, because I was working so much on the movie, I postponed my birthday party, so New Year's Eve is my big 30th birthday party."
And Aguilera is already embracing her 30s: "Being 30 is better than being 20, I'll tell you that. The lessons I've learned and how I've grown is incredible."
2010 has been an eventful year for the singer - she split from husband Jordan Bratman in October (10) and went public with her new boyfriend, Matt Rutler, last month (Nov10). She also won rave reviews in her first leading movie role, opposite Cher in Burlesque.