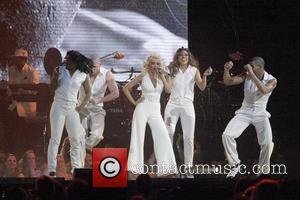 Picture: Christine Aguilera performing on her Back To Basics 2007 tour at Acer Arena Sydney, Australia - 24.07.07.

Christina Aguilera has reportedly bought Ozzy and Sharon Osbourne's former Beverly Hills home. The rock couple turned the estate into a reality TV mecca after shooting The Osbournes at their Los Angeles mansion. The Osbournes put the Doheny Drive estate on the market in April (07) after Ozzy confessed, "I don't want to stay in that house any more... The house holds bad memories for me because it reminds me of the terrible time Sharon got cancer and of times when me and the kids were doped out of our minds." Reports in America suggest Aguilera paid an undisclosed sum for the mansion and plans to turn it into her Los Angeles base.