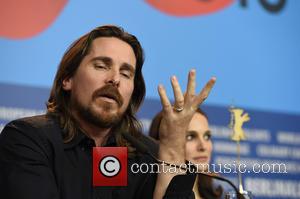 The Dark Knight star reportedly tore his ACL (anterior cruciate ligament) several weeks ago, and although he had recovered enough to start work on financial drama The Big Short last month (Mar15), the injury has forced producers at Fox to rethink their scheduling for The Deep Blue Good-By, which was expected to begin production in May (15), according to The Hollywood Reporter.

The film would have required Bale to play a more physically intensive role as protagonist Travis MCGee, an army veteran who works as a "Salvage Consultant", recovering lost treasures.

A new timeline for production of the thriller has yet to be announced.

James Mangold had been tapped to direct the movie, which was due to co-star Gone Girl actress Rosamund Pike, Game of Thrones star Peter Dinklage and Nicola Peltz.

Bale's injury is the latest set back for the project, which has been in development since the late 1990s. Filmmakers Oliver Stone and Paul Greengrass had previously been attached to direct, while Leonardo DiCaprio had to step down as the star of the movie last year (14) due to a scheduling conflict. He remains onboard as one of the movie's producers.