Actors often approach a seemingly easy role, only to discover an incredibly deep, unseen story to work from. This doesn't often come when reinterpreting Biblical text, however.

In the upcoming Ridley Scott film, 'Exodus: Gods and Kings', Christian Bale stars as Moses - the incredibly well-known biblical character, but when asked about the difficulties of portraying such a beloved and iconic character is "that he's so known, and he's so personally loved, and so important to so many people. And people have very very strong opinions about exactly how he should be played." 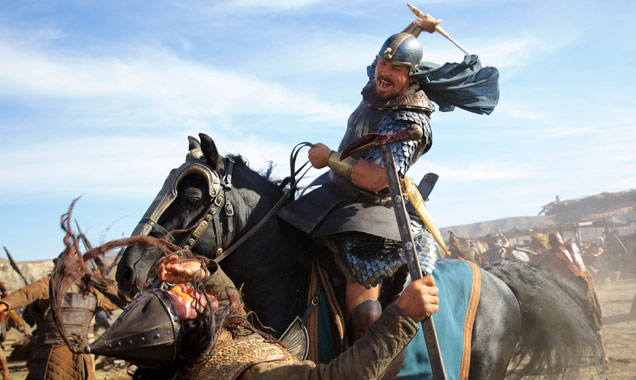 Christian Bale shows off the fighting spirit of Moses

Yet Bale still took on the job despite the difficulties, especially because he felt that the story of Moses was just so important. 'It's a vital story; it's a resonant story" explains Bale. Furthermore, when Bale began looking into what was supposedly a very simple character, he turned up an awful lot more. Bale discovered that Moses was "a far more complex character that I had ever begun to realise".

Bale described his revelations about the iconic character, by saying: "The traditional portrayals of him, and the sort of 'Sunday School' idea, is one which is quite simple. Wonderful achievements: Liberator, Law Giver, etc. But the passages that I was unfamiliar with - and I've read from beginning to end - were that he fought. He fought an awful lot with God; he wrestled with God" as Bale explains, this is the literal definition of the word Israelite.

Watch The Trailer For 'Exodus: Gods And Kings' here:

But furthermore, Bale went on to explain the complex emotions he uncovered regarding the relationship between both Moses and God. He discussed how "he didn't want to be his representative. He was living in very violent times. He was very conflicted himself about who he was - who his own identity was. He was an internally intriguing character. Possibly the most I've ever come across."

More: Christian Bale Suggests Moses Could Be Considered a "Terrorist"