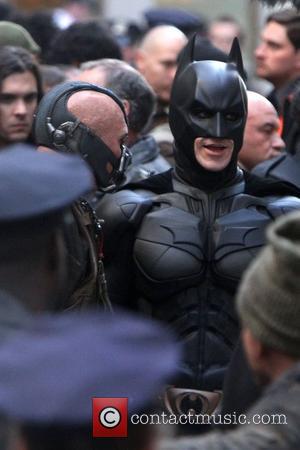 British actor Christian Bale fought back tears during an emotional tribute to his late co-star Heath Ledger at the MTV Movie Awards on Sunday (03Jun12).
The star took to the stage at the Los Angeles ceremony along with his Batman co-stars Gary Oldman and Joseph Gordon-Levitt to present footage from their upcoming blockbuster The Dark Knight Rises.
They also showed scenes from the second film in the series, The Dark Knight, featuring Ledger, and Bale struggled to contain his emotions as he watched the late actor on the screen.
Bale's eyes glistened with tears as he said, "Wow, great to remember Heath at that moment. Wonderful to see Heath Ledger there," prompting applause from the audience. He took a moment of silence and lowered his head before handing over to Gordon-Levitt to introduce their director Christopher Nolan.
Ledger died in 2008 from a prescription drug overdose just months before The Dark Knight hit cinemas.