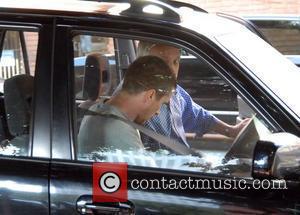 Picture: Christian Bale leaving a restaurant in Brentwood where he had lunch with his father and two female companions Los Angeles, California - 29.07.08

British actor Christian Bale has been left with a disfigured finger after slicing off the top of the digit in a dirt-biking accident.
The Dark Knight star hurt himself during an action excursion earlier this year (09) and has been left with a mangled left index finger which will be scarred for life.
But Bale admits he barely felt the injury - and didn't realise how serious it was until he caught sight of his bloodied hand.
He says, "I had a dirt-biking accident and chopped it off at the end. You have something as extreme as that - you've lost the end of your finger - but it didn't hurt.
"I just kept looking at it, going, 'Why is that not hurting?' The body's amazing. It (the finger) looks horrible. Everyone else almost faints looking at it."