Whenever those polls get published listing the greatest British musical influences of the last thirty years or so, it's fairly unlikely that the name Richard D. James will feature on the roster. You'll probably see the likes of Noel Gallagher, or Damon Albarn, or even god forbid it Thom Yorke, but in all probability James will continue to languish in (Relative) obscurity. 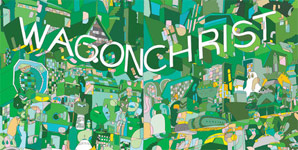 His omission however is more than just an oversight. Born in Cornwall and creating music in his bedroom from the early 1980's, the man now sometimes known as the Aphex Twin spawned a generation of computer toting auteurs, a posse who would in time help create a vibrant under and overground dance music culture in this country. This platform has helped assure the mainstream success of countless acts since, right up to contemporary modern icons such as Chase and Staus and Pendulum, and if you've ever wondered who inspired all the weird soundscapes in Kid A, well...you'll figure it out.

James also proved to be a guiding light to fellow Cornishman Luke Vibert, who's been issuing a wealth of material under various monikers for nearly twenty years. The duo are close friends, but admirably rather than use the better recognised Aphex brand for commercial gain, Vibert has so far refused to release the various fruits of their frequent collaborations.

Instead we get the first outing for the Wagon Christ imprint since 2004's Sorry I Make You Lush, but whilst that was mostly an exercise synthetic, acid techno archetypes, Toomorrow wears it's creator's love of hip-hop and breakbeats like a bygone tag on a disused building. Right from the sampleadelic beginning Introfunktion, the mood is derived from the early nineties, an era when the warmer and more introspective licks of soul and jazz were plugged directly into a genre from which "Rappers" were still classed as a separate breed apart.

This being the case, there are nods to the acknowledged kings of the leftfield DJ mash ups Coldcut - via the title track and the noodly closer Mr Mukatsuku - whilst fans of the legendary Pharcyde may wish to skip straight to the likes of Ain't He Heavy, He's My Brother and Respectrum. It's not an unwelcome trip down memory processor lane, but we're dealing here with a composer who freely admits to having a fairly short attention span, and just as the listener is lulled into a false sense of consistency in comes the blurry, late night soul of Oh, I'm Tired, followed immediately by the Eastern spouting weirdness of Wake Up.

With a skewed take on late twentieth century black music not dissimilar to the likes of sometime dubstepper Hudson Mohawke, there's an argument that ancient has never been so contemporary, but the inherent weirdness will probably appeal strictly to the converted. For a case in point take Lazer Dick, a rattling soundclash of 303-led house and splashy, disco synths, whilst the stand out effort Accordian McShane sounds like the soundtrack to a blaxploitation slasher flick.

Like James, Vibert claims to have hundreds of unreleased tracks on his various hard drives, the kind of rumour that has intrepid web sleuths prowling through oceans of malware in search of the next anonymously leaked morsel. The truth though is less romantic; Toomorrow is good at what it does, but there's nothing here as haunting as Sorry's...I'm Singing here, or as lovely as it's compatriot Shadows. The past it seems just isn't what it used to be.