Shot with a level of realism we rarely seen in Indian cinema, this film combines sharply engaging characters with an involving story that really gets under the skin. After a series of entertaining documentaries (such as The Yes Men), director-cowriter Smith returns to narrative fiction, but gives himself the challenge of adapting an American short story (by cowriter Russell) to another culture. And with a cast of mostly non-actors, he creates a movie that harks back to Indian classics while telling a thoroughly modern story. 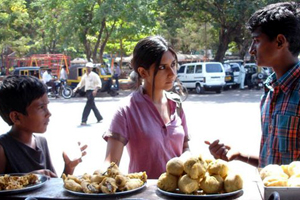 The story takes place in Goa, where 18-year-old Venkatesh (Chavan) does odd jobs in a hotel and sleeps on the lobby floor. When not working, he's running the streets with 11-year-old Jhangir (Badshah), trying to make some extra cash and dreaming about taking a dip in an idyllic pool they watch over a wall. In this oasis, the quiet Nana (Patekar) lives with his surly teen daughter Ayesha (Mohan). And as Venkatesh and Jhangir talk about finding a better life, Venkatesh gets up the nerve to ask Nana for a job.

What happens from here is gentle and realistic, as Venkatesh and Jhangir become friends with Ayesha, and Nana asks Venkatesh if he wants to move to Bombay with them. But there are all kinds of other things going on here that keep the film from ever being predictable. When Venkatesh travels home to see his family in the countryside, we see his responsibilities in striking contrast to his free-spirited life in the city. And there's also the added wrinkle that Nana sees Venkatesh as a kind of replacement for his late son.

A man who is known only as The Driver moonlights as a getaway driver at night, when he is not doing his day job as a movie stunt driver and mechanic. He only has one rule as a getaway driver: as long as his clients return to his car within five minutes, he will help them get away. If they take longer than five minutes, he leaves and doesn't help them.

When he is not doing his day job as a movie stunt driver and mechanic, a man known only as The Driver moonlights as a getaway driver at night. His one rule is simple: as long as his clients return to his car within five minutes, he will help them get away. If they don't, he leaves.

Shot with a level of realism we rarely seen in Indian cinema, this film combines...