While Dave Grohl has been busying himself on the Foo Fighters' recent hiatus with the underwhelming Them Crooked Vultures, Bassist Nate Mendel went to do some shows with a reunited Sunny Day Real Estate and Taylor Hawkins put out another Coattail Riders album, guitarist Chris Shiflett has been putting together a more relaxed and country influenced album which, in all fairness trumps all of his band mates other projects by a long way. 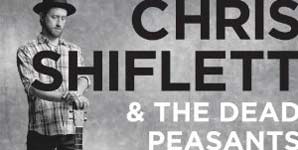