Chris Martin working on U2 album?

Coldplay singer Chris Martin is rumoured to be helping U2 with their new album, after he was spotted in the studio with them in New York City. 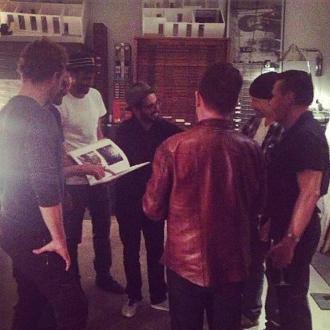 Chris Martin is rumoured to be helping U2 with their new album.

The Coldplay frontman reportedly joined the Irish rockers - Bono, The Edge, Adam Clayton and Larry Mullen Jr. - at Electric Lady Studios in New York City, where they have been working on their 13th album with producer Danger Mouse.

''Shortly after that, a van arrived with three guitars - each with a white label that said 'U2/Edge' - and our reporter actually helped bring the gear into the studio.

''He saw Larry and Chris Martin together in another room before heading back outside.''

The site says when Chris was later approached, he denied he had been in the studio.

The singer is a good friend of Bono and a long time fan of U2, previously saying of the group: ''We respect any musician, particularly ones who have kept going and not changed line-up and have always been good.''

U2 were busy in New York over the weekend, with a video shoot on the roof of Electric Lady Studios, playing an acoustic version of 'Sunday Bloody Sunday' believed to be for the Inside Out Project, an art initiative which hosted a number of works throughout New York City in May.

U2 then posted a photo of the group with Chris meeting the project's founder, JR.

The picture, on the U2 news Twitter feed, was captioned: ''Jedi Council mtng with Bono,Chris Martin, @joseparla, Edge, Larry & @jrart in NYC via @solguy #u2 #bono #edge #larry (sic).''