The top grossing film of the weekend was the latest Marvel/Disney outing, which absolutely dominated the box office

Thor: The Dark World almost became the top grossing November release of all time this weekend when it managed to bring in an estimated $86 million in the domestic market since its Friday (Nov 8) release in the USA. It narrowly missed out on beating the record set by Skyfall in 2012, but its numbers are nonetheless a fantastic result for studio bosses at Marvel and Disney.

Chris Hemsworth is back as the God of Thunder

Benefiting from the global blockbuster that was Marvel's The Avengers, much like Iron Man 3 did earlier this year, the estimated weekend takings of Thor 2 prove that there is still a great deal of life left in the superhero genre and despite lukewarm reviews, the film still has a keen and dedicated audience. The domestic performance from Thor 2 mirrors the similar successes enjoyed by the film in the international market, where it has already grossed $240.9 million. Thor was released a week earlier in a number of key international markets, including the United Kingdom and Australia, and has continued to perform well overseas.

Tom Hiddleston has won over audiences again as Loki

Coming in second for a second successive week, Jackass Presents: Bad Grandpa held strong once again to score $11.3 million over the weekend. The film has grossed just short of $80 million domestically in the three weeks since it was released, which signals huge gains for Paramount, who spent only $15 million on the film.

Swapping places in the weekend chart, the animated Thanksgiving family film Free Birds moved from fourth to third over the weekend, no doubt helped by the approach of the holiday. Meanwhile, the ensemble comedy Last Vegas slipped to fourth, but only down to a $80,000 difference. Free Birds grossed an estimated $11 million over the weekend, whilst Last Vegas managed just $11 million. It was a rare occasion for the box office, with the top 2 - 4 films separated by just $200k. Last Vegas boasts an impressive cast, but has struggled to capitalise on this

Closing the top five was Ender's Game, which took in $10.25 million since Friday and dropped tremendously after claiming the top spot last week. Overall, the film dropped 62.1% of its audience figures over the week and has a total domestic gross of just $44 million, more than half of the $110 million budget it received. Still, in taking the final spot in the top five, this means that for the first time since its release last month, Gravity has finally fallen out of the top five. Still, it managed to bring in $8.4 million, and bring the overall domestic gross past the $230 million mark. 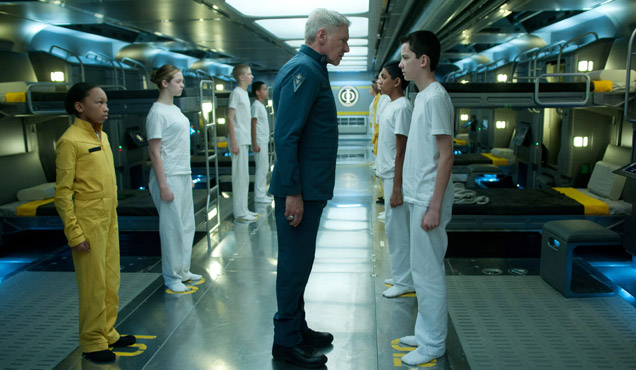