When he first read the script, Chris Hemsworth knew he wanted to star in the fact-based 19th century seafaring epic In the Heart of the Sea.

Chris Hemsworth was filming the Formula One drama Rush at the time, and handed the script to director Ron Howard. And they reteamed to get it made.

"Very rarely do you read something and you are properly transported to another place," Hemsworth says. "It had that effect on me, and I kept thinking about it and the questions it raised and forces you to ask. It was also an opportunity to do something that's visually stunning on a big epic scale, but was a drama. That's a combination I hadn't seen a lot of, and I don't think has been made as much." 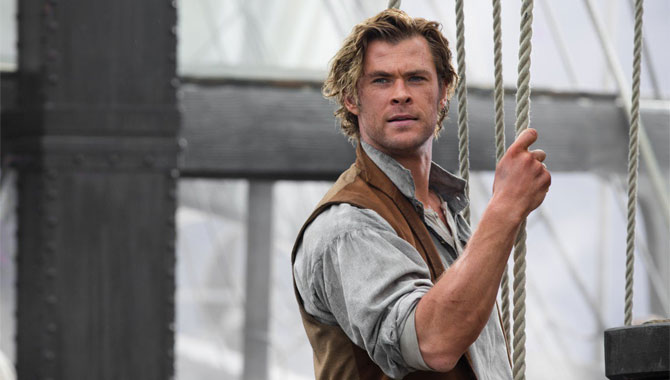 Chris Hemsworth plays the first mate on the ship

But making the film was gruelling, as Hemsworth had to go on a starvation diet of just 500 calories a day to play a whaler who is left adrift at sea when a giant white whale sinks his ship. "It was unlike anything I had ever done before," he says. "It was like being part of a football team back in high school or something. I mean, every film has challenges and all of us are doing it together, so you keep each other motivated and keep each other in check. We couldn't go away for a month and get skinny, we had to do it while we were shooting. At one point, a day's rations were a boiled egg, a couple of crackers and a celery stick!"

All of this was part of Hemsworth's effort to make sure the film had a strongly accurate edge to it. "This wasn't swashbuckling, skipping off to sea," he laughs. "This was the industry and it was hardcore. There are similarities to going off to war. You know, you didn't know if you were coming back and you were gone a long, long time."

Then once he finished shooting, he had to beef back up to reprise his role as Thor. "This is the second time I've done that," he says. "Each time you put the muscle back on, your body has that muscle memory and wants to hang on to it!"

Watch the trailer for In The Heart Of The Sea here: