Hunky Chris Hemsworth Was A Big Hit On Vacation Set

Chris Hemsworth Lived Up To His God-like Thor Status On The Set Of Vacation, Leaving Co-star Christina Applegate And Most Of His Other Castmates Swooning Over His Perfect Physique. 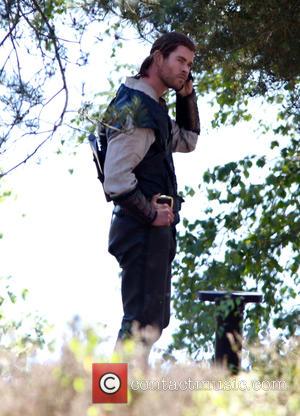 The Australian hunk was still shooting Thor when he signed on to play Stone Crandall in the film and he was in peak physical form for the comedy's most revealing scenes.

Hemsworth spends much of the movie wearing very little and flaunting his character's large penis - and Applegate admits it was tough to avert her eyes whenever he was on set.

She tells WENN, "We had all been standing at the bottom of the stairs after he had been doing some fittings upstairs; like should it (prosthetic penis) get into position to go to the left or go to the right, longer, shorter... So finally they narrowed in on the hero penis, I guess! He came down and we were all clapping: 'Ah yeah, that's the one!'

"Then we all saw his abs and there was a bit of silence in the air. It wasn't like I was staring at Chris Hemsworth and panting like a dog. It wasn't like lascivious in any way. We were all so damn impressed at how a body can look like that!

"I wanted to know what exercise he does to sculpt out the abdominal area in such a way that is unique to anything I've seen before except for The David (Michelangelo's statue). So we were all just really freaked out by that. Men, women, children; everyone's mouths were agape!"

But his physique wasn't the only thing that impressed Applegate: "He's this funny Australian dude who is really good at accents and he's amazing and game for anything. When someone can make me laugh and is good at they're job... I was definitely impressed."