While other recent promotional interviews for 'The Avengers: Age of Ultron' have been interesting, none have been as funny or wacky as Chris Hemsworth and Chris Evans'.

When embarking on a franchise like 'The Avengers', it must help to get on well with your other cast members. In a recent interview with Chris Hemsworth (Thor) and Chris Evans (Captain America), the two actors displayed a hilarious friendship with one anther - giving a tiny glimpse into what it must be like on set with these guys. 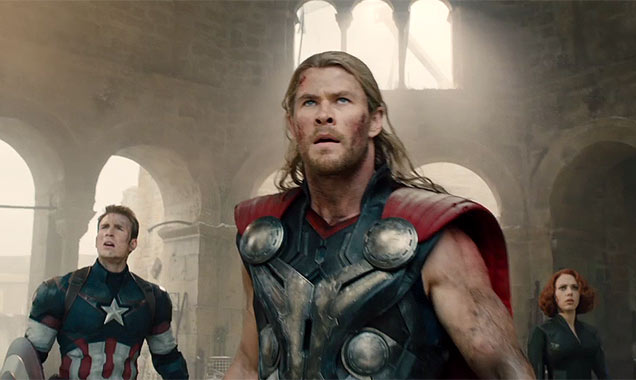 Chris Evans, Chris Hemsworth and Scarlett Johansson in 'The Avengers: Age of Ultron'

"Lovers, kindred souls, kindred spirits", said Hemsworth, while discussing the relationship between Thor and Captain America. Evans jumped in by revealing: "We wear necklaces with a little broken heart, and when we put them together." But when they tried to draw a comparison between themselves and another movie, they found themselves with different opinions.

"He's the Jerry Maguire to my Renée Zellweger" said Hemsworth - something Evans saw differently. After a brief disagreement, in which Evans reluctantly agreed to be Tom [Cruise], Hemsworth went back to say "He's the Jerry to my Maguire - How's that?"

"When you're on 'The Avengers' films, you have all these people that we know very well and it really is like a party and its hard to wrangle everybody" confirmed Evans, describing the filming process. But while it was all fun and games for them, it must have taken its toll on director Joss Whedon, as Hemsworth joked "We heard 'Shut Up!' a lot".

With so many more funny moments in the interview, like Chris Evans spilling coffee down himself, and taking a moment to show it off to the camera, the interview ended on the question of what they wanted the audience to take away from the movie, to which Evans hilariously responded with "I hate that question. Sorry."

The two finally settled on the purpose of the first film, with The Avengers choosing Captain America to be their leader, but without wishing to be outdone, Hemsworth finished by saying: "Well, that's debatable still. And in this one, they're like: 'You know what? Thor's clearly the strongest, and the coolest, and the smartest, so let's follow him."