Chris Hemsworth Loved The Female Energy Of The Huntsman

For the sequel to the 2012 fantasy action movie Snow White and the Huntsman, Chris Hemsworth found himself surrounded by powerful women.

Chris Hemsworth may have the title role, but The Huntsman: Winter's War centres on feisty divas played by Charlize Theron, Emily Blunt and Jessica Chastain. "It's a prequel," Hemsworth explains. "It's the backstory my character in the first one was telling when he was talking to Snow White about his wife. It's filling in those blanks. But it's also where the Huntsman came from." 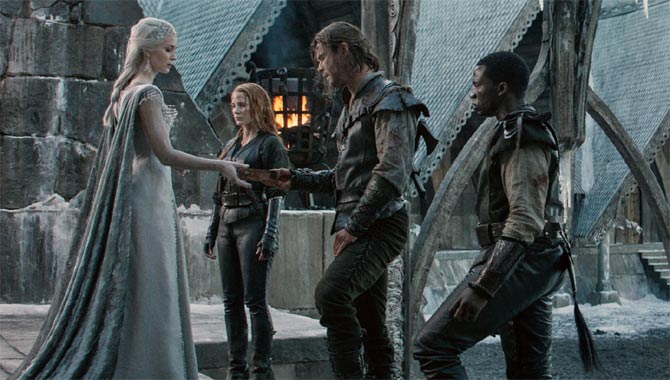 And Blunt clarifies that the film is a "prequel that veers into a sequel". She also says that the three leading women were what drew her to the project. "Three very powerful female leads," she says. "And they're layered, nuanced, interesting characters. Women are proving time and time again that they can be a part of big-action blockbusters and fantasy films like this."

And Hemsworth was happy to dive in. "I had brothers growing up, but this was a whole different world for me," he laughs. "They all had a great sense of humour. I copped it a fair bit!"

Clearly a fan of being surrounded by strong women (he'll also be the token male in this summer's Ghostbusters reboot), Hemsworth says that it's about time for these kinds of movies. "The balance has been tipped for a long time in the men's direction," he says, referencing his ongoing role in the Avengers franchise. "There are often seven or eight male superheroes compared to just one woman in a film. But this is the opposite. And it's exciting to be part of something like that. I don't think we've seen it to this level before. It's such a funny conversation to even be having because of course it should be that way! Women should be equal and have the same opportunities. I am a feminist for sure."

While Blunt and Theron are used to strong action-movie roles, this was an unusually physical role for Chastain. Hemsworth remembers talking to her as the project was coming together: "The first thing Jess said was, 'Do I get to kick ass? And I said, 'God yeah!' And she was fantastic, there's no shortage of talent there. I was nervous about taking on the action on my own. But talking to Charlize, Jess and Emily, I thought, 'Wow if we can pull this off it'll be great." And Jess has brought such a layered performance. There's nothing passive about her - she's definitely stronger than me."

Watch the trailer for The Huntsman: Winter's War: