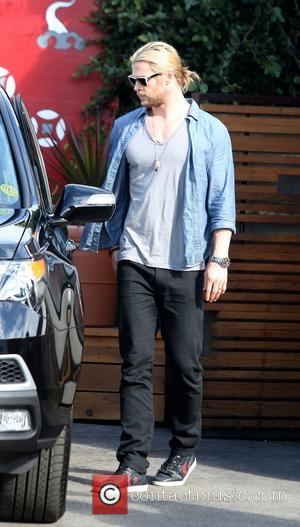 Picture: Chris Hemsworth goes out to lunch in Santa Monica with his wife and their daughter Los Angeles, California - 30.12.12

Before 50 Shades of Grey had even been commissioned for the big screen, fans of the book were discussing who they'd want to see play Christian Grey, one of the two central characters of the book. Having become one of the most read books of the decade, it is quickly becoming one of the most talked about films and more and more rumours keep finding their way into the mill. The latest two to hit are about Chris Hemsworth and Krysten Ritter.

According to the International Business Times, the race is now between the star of Thor, Hemsworth, and Stephen Amell from Arrow. Apparently, Hemsworth's foray in upcoming movie Rush, in which he has a number of nude scenes, has persuaded the 50 Shades producers that he'd be ideal. Having been questioned about it though, it appears he remains unsure and unenthused at the prospect.

In contrast however, Krysten Ritter from Breaking Bad has expressed her interest in the project via Twitter. In a retweet and reply to a twitter user she said she's be 'down for' playing Ana.

Thanks! i would be down. ;) RT @justme_toni: @50shadesclub between the two it should 100% be @krystenritter

So far very little the film's details have been released, except that Kelly Marcel will be writing the script- much to the massive disappointment of Bret Easton Ellis who wanted to be a part of the project.