The actor praises his co-star as being a brilliant mentor.

The Marvel Cinematic Universe and its characters are undoubtedly some of the most recognisable beings in the entertainment industry. For almost a decade now, Marvel Studios and a number of different talented screenwriters, directors and producers have been teaming up to release a slew of compelling box office smash hits, starting out with 'Iron Man' back in May, 2008. Robert Downey, Jr. was the actor to bring the titular hero, aka Tony Stark to life in that flick, helping open the door for what has been a hugely successful future.

In 2016, fans would see Iron Man go head-to-head with Captain America, played by Chris Evans, in 'Captain America: Civil War'. Various members of the 'Avengers' team, which had been introduced in a number of films ahead of 'Civil War' would join either side, threatening unbalance in the world as those fighting crime began to fight one another.

Though Captain America and Iron Man may have some huge tension on the big screen, that's not something that seems to trickle down to the actors playing those characters. In fact, Evans has hailed Downey, Jr. as his mentor, and praised his take on Iron Man.

Speaking about his co-star during his appearance at Ace Comic-Con, the actor explained (via ComicBook): "It’s low-hanging fruit to say [Robert] Downey. He’s such a wonderful guy and is so talented, so experienced, and so supportive... He’s always been in my corner and I’ve always felt supported by him. He really brings everybody in to the group and makes sure everyone feels welcome, especially on this last one... He really just opens his arms and it sounds so cheesy, but he makes it a family and none of this would happen without him." 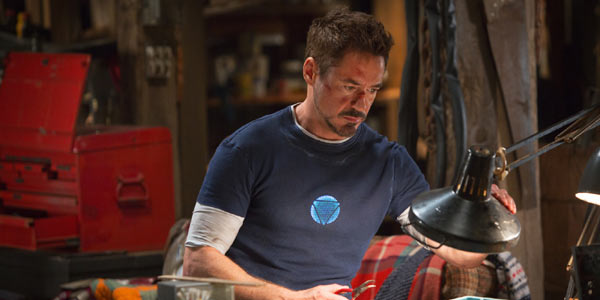 Robert Downey Jr. is consistently praised by co-stars for his portrayal of Tony Stark, aka Iron Man

Though Evans doesn't think anybody else should tackle the role of Iron Man, it is one that Downey, Jr. has been rumoured to be retiring from in the near future. If that does happen, it's surely only a matter of time before a brand new performer steps into the mantle.

The Marvel comic books have of course had a number of different people as Iron Man, with a recent iteration seeing a black teenage female called Riri Williams wear the iconic armour suit. Perhaps the direction the MCU could take if Downey, Jr. really is on the way out. We'll just have to wait and see.

Evans and Downey Jr. will next star in MCU flick 'Avengers: Infinity War', released in the UK on April 27, 2018.