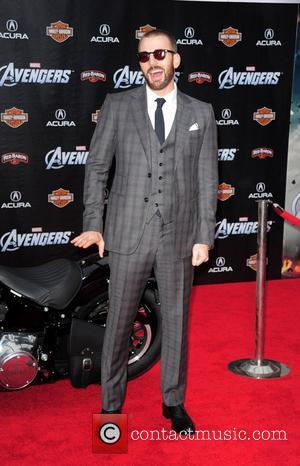 Chris Evans, the American actor who stars as Captain American in the forthcoming movie The Avengers, may not be such a masculine action-hero after all. In a new interview with Details magazine, a candid Evans admits, "I weep at everything.I emote. I love things so much - I just never want to dilute that".
The actor, still best known for his role in the 2004 movie The Fantastic Four, also revealed his first celebrity crush. He says he was infatuated with Oscar-winning actress Sandra Bullock after seeing her in the movie 'Speed', saying, "I literally had a big poster (of her)". Bullock may be a little too old for the actor, but Evans revealed what he's looking for in a woman, explaining, "I like wet hair and sweatpants. I like sneakers and ponytails. I like girls who aren't so la-di-da. L.A. is so la-di-da. I like . girls who give me a hard time, bust my chops a little". On his own personality, Chris described himself as having two sides, saying, "I think my daytime person is different than my night-time person. With my high-school buddies, we drink beer and talk sports and it's great. The kids in my Buddhism class in L.A., they're wildly intelligent, and I love being around them, but they're not talking about the Celtics".
Evans joins Scarlett Johansson, Robert Downey Jr and Chris Hemsworth in 'The Avengers', directed by JOSS WHEDON.