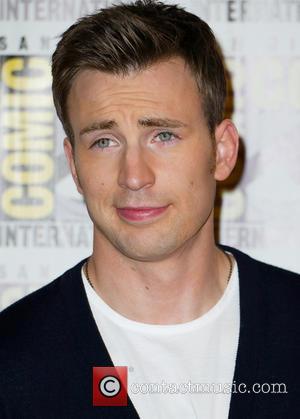 One of America's prestigious sporting event will take place next Sunday (Feb 23rd).

The 32 year-old actor's duty will be to put his own twist on the signature command, "Drivers, start your engines."

ComicBookMovie.com reports, as well as voicing the famous phrase Evans will be taking part in several ceremonies before the race begins at 1 p.m.

He will be introduced at the annual driver's meeting and will ride in one of the Grand Marshall vehicles around the track during the pace laps.

"What better way to kick-off 'The Great American Race' than with Captain America, Chris Evans, giving the command to start engines,"Chitwood said.

Adding, "We look forward to having him be a part of our pre-race ceremonies in front of more than one hundred thousand race fans in attendance and millions more watching on FOX as we launch the 2014 NASCAR Sprint Cup Series season."

Evans will be next seen in the upcoming 'Captain America: The Winter Solider,' the sequel to the 2011'Captain America' flick as well as a follow-up from 2012's 'The Avengers'. It is scheduled for release on April 4th.

Other actors who have also done the same duty are Matthew McConaughey Nicholas Cage, and James Franco.

The NASCAR Sprint Cup race will take place on Sunday, Feb 23rd, at Daytona International Speedway and is expected to begin at 1 p.m. ET.

Chris Evans as 'Captain America' in the upcoming 'The Winter Soldier'