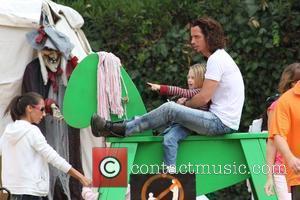 Rocker Chris Cornell is reportedly fuming after video footage showing tragic actress Brittany Murphy partying at his wedding surfaced online.
Clips from the Soundgarden star's 2004 nuptials to his wife Vicky, whose maid of honour was the late Clueless star, were said to have been put up for sale on a website.
Cornell, who alleges the video was stolen, has threatened to sue the online ad site and even asked its owners to hand over the details of the person selling the tape, according to the New York Post.
A source tells the newspaper, "The video features behind-the-scenes wedding moments, many of Brittany Murphy."
The ad has since been removed.
Murphy died after suffering a cardiac arrest early last month (Dec09).