Since the disbanding of Audioslave, Chris Cornell has had something of a renaissance as an artist. He has released two solo albums (one so-so, the other entirely baffling), played countless solo acoustic tours the world over, had a worldwide hit with a James Bond theme song while also finding the time to reform his first significant band, Soundgarden, and make a pretty impressive LP and tour the world to rapturous responses with them as well. Chris Cornell refuses to stop, and on the eve of the release of his fourth solo album next month, he is reissuing his first solo album on vinyl and CD. 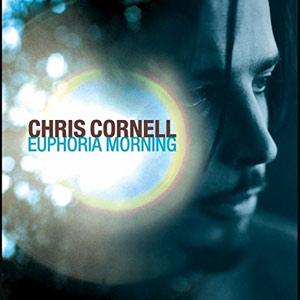 As far as reissues go, the only extra content on offer here is an extra letter in the title, so we can skip right to talking about the music. 'Euphoria Mourning' was originally released after the break-up of Soundgarden and a few years before the emergence of Audioslave and it's clear that Cornell took the opportunity to move away from writing rock music and embrace more atmospheric, psychedelic influences previously only hinted at by Soundgarden. Other key collaborators on the album were Natasha Shneider and Alain Johannes, the latter of whom continues to collaborate with Cornell and has been behind Mark Lanegan's recent solo revival as well as being involved with everyone from Queens of the Stone Age to Jimmy Eat World. Johannes' influence can be heard all over the record.

'Euphoria Mourning' still stands as Cornell's most cohesive and probably best solo album to date. 2007's 'Carry On' was all over the place musically and didn't really go anywhere and 2009's Timbaland produced 'Scream' was nothing, if not a wholly misjudged career side step. 'Euphoria Mourning' has its own individual vibe and the whole thing fits together perfectly. You get the dark, eastern influenced opener 'Can't Change Me', the soul influenced sounds of 'Disappearing One' and 'Wave Goodbye' and the melodramatic, meandering album closer 'Steel Rain'. Cornell doesn't entirely step away from alternative rock here though, as can be heard on the slow burning 'Mission', or the highly percussive 'Pillow of Your Bones', which both could have easily fit on a later Soundgarden album. Perhaps where the album hits its stride hardest though is the bluesy piano ballad 'When I'm Down', which opens with Cornell crooning like he's the last man at the party and all the pretty girls have gone home, before building to a giant vocal work out. It thrills in the same way that 'Preaching the End of the World' does earlier on in the album with the instruments moving to the side to let Cornell's voice meander and strain to its glorious best.

There are missteps here. A song like 'Flutter Girl' hasn't exactly aged well, but on the whole, the quality of this effort still shines through. In terms of the reissue, there must have been a couple of b-sides or bonus tracks they could have tacked on to the end to make a repurchase worthwhile, but at least a welcome light is being shone on one of rock's greatest survivor's most intriguing recordings.