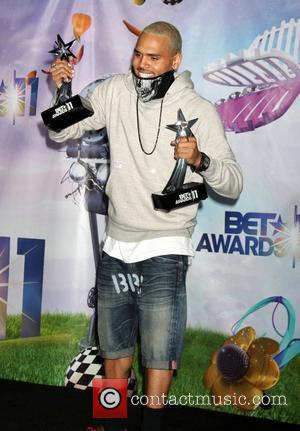 Chris Brown's representatives have threatened to take legal action against editors of a U.S. magazine over reports the star hurled homophobic abuse at players during a basketball game.
A report in America's Star magazine suggested the Kiss Kiss star joined in a casual basketball game in Los Angeles last month (Jun11) and turned angry when the match didn't go his way, prompting him to shout "anti-gay slurs".
The story was accompanied by a picture of the singer, but the star's publicist insists the snap was taken at a different game in March (11), and Brown was in fact shooting a video on the day he is alleged to have made the comments.
Now aides reveal they are considering launching legal action over the report.
A spokesperson for Brown tells GossipCop.com, "A totally fictitious article ran in the current Star Magazine (issue date July 25, 2011) accusing our client Chris Brown of doing something that he did not do. The article claimed that on June 29, 2011, Chris participated in a pick up basketball game at 24 Hour Fitness Center in LA and said some very inappropriate statements. The incident described did not occur, nor did the Star ever contact Chris' representatives to request comment or confirmation.
"Chris was filming a video with AceHood on June 29 and never left the set. He spent the entire day with dozens of members of the production team filming the video for "Body To Body" at 1870 Sunset Plaza in West Hollywood. The Star accompanied the fabricated story with a photo of Chris playing basketball in New York that was taken on the day of his F.A.M.E. CD release in March.
"Chris Brown's management is considering taking appropriate legal action against the paper... We stand behind our client and want to set the record straight that this did not happen."