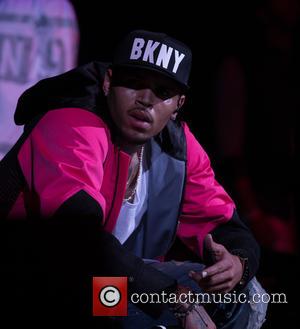 Chris Brown has slammed singers Adrienne Bailon and Tamar Braxton for suggesting his girlfriend Karrueche Tran should leave him.

Bailon and Braxton commented on the on/off relationship between the troubled R&B star and his model girlfriend during a panel discussion on their U.S. daytime talk show The Real on Monday (03Nov14).

They were discussing "inter-friend-tions", in which you tell a friend the person they're dating is "no good" for them, when Brown was brought up.

Braxton said, "We have got to pull an inter-friend-tion with my girl Karrueche. I don't know about this back and forth she got going on with my man, Chris Brown."

Her co-host Bailon agreed, suggesting Tran stays with the star because "some of her friends also reap the benefits of her dating Chris Brown."

However, Brown did not take the comments lightly, taking to Instagram.com later that day to fire back at both Bailon and Braxton.

He posted a photo of Bailon, who previously dated Kim Kardashian's younger brother Rob, and wrote in the caption, "Bring that a** here boy' Adrienne Bailon.... You ole trout mouth a** b**ch (sic).

"U (you) tried it. Won't u the same b**ch that was f**king wit (sic) married men? U also was keeping up with the Kardashians! U can't talk about relationship goals when u don't even have life goals. Ain't you a Cheetah Girl? Last time u was important n**gas was riding spinners and wearing 6x talk Ts (t-shirts). You the same b**ch having threesomes like the rest of these hoes."

Brown didn't stop there - he also took aim at Toni Braxton's sister, writing, "U tried it too Tamara Braxton. U take the role of the ugly sister. It's always the people wit (with) no career that talk all the s**t. Dat (that) plastic surgery f**ed yo (your) face up. B**ch look like she always saying 'huh'? Muppet face a**! I don't even need a photo for Tamar, that b**ch is beat (looks ugly) in every photo!"

Braxton shot back at Brown's comments by posting a photo of herself alongside Bailon, and a caption that reads, "@chrisbrownofficial @karrueche no one came at either of you but was simply using your relationship as an example of things us ladies go through in a relationship!! I do not know nor do I give a hot damn about your relationship personally... honestly and respectfully I'm very sorry if you both were offended about our girl chat...

"However, you will not think it's ok to come at grown women and talk to either myself or @adrienne_bailon as if u have ever has us each in your bed at any point in our lives (sic)! (Maybe your mind is clouded)

"Note to self: u are not my man or my daddy so you got me completely f**ed up!... (like your reputation) I'm not 20 nothing years old and I am fine with all 3 #1 Tv shows and making my dreams come true with (her album) Love&War and now #letmeknow...which is on iTunes (sic)."