A Bodyguard Allegedly Working For Chris Brown Was Arrested For Illegal Gun Possession Outside A Hollywood Club On Sunday Night (09aug15). 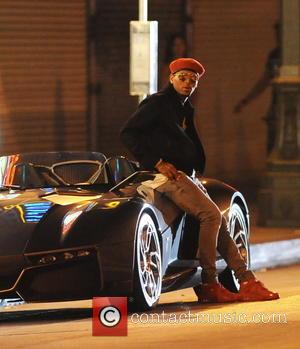 Clay Lewis claims he was on duty as he waited in his parked car outside Penthouse, where the Loyal hitmaker was partying, and he agreed to let police officers search his car after they spotted drug paraphernalia in the front seat.

Cops found a loaded Glock in the trunk of the car and took Lewis into custody for the felony, after discovering he didn't have the required concealed weapons permit for the state of California.

Meanwhile, Brown also dodged potential legal trouble on Sunday after having second thoughts about getting behind the wheel of his new sports car after his night of clubbing. Video footage obtained by TMZ shows the singer climbing into the driver's seat of the $200,000 (£125,000) Rezvani Beast, before deciding to hand the keys over to a sober friend to drive him home.

The news of Lewis' arrest emerges months after another of Brown's security guards received a suspended 90-day jail term for his involvement in a fight outside a Washington, D.C. hotel in 2013.

Christopher Hollosy was accused of punching Parker Adams in the face after he reportedly approached the singer with two female friends and asked to be part of a photograph in October, 2013.

Brown was alleged to have thrown the first punch, while Adams claimed Hollosy broke his nose.

The incident landed the guard a misdemeanour assault conviction, and he was sentenced in December (14).

The R&B star, who pleaded guilty to the same charge, dodged jail time after he was sentenced to time already served and fined $150 (£94). Brown had already spent two months in prison in early 2014 for a probation violation.