Chris Brown has been challenged to a no-holds barred fight by wrestler CM Punk with all the profits going to a women's shelter. 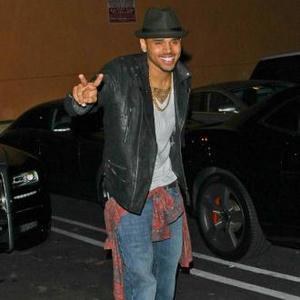 Chris Brown has been challenged to a no-holds barred fight for charity by wrestler CM Punk.

The 'Deuces' singer and the WWE champion have become embroiled in a War Of Words after the grappler took to his twitter account and said he wanted to ''curb stomp that turd'' Chris for assaulting his ex-girlfriend Rihanna in February 2009.

He tweeted: ''@CMpunk needs more followers. He's such a leader! Not to mention the roids hes on has made it utterly impossible for him pleasure a women.

''@CMpunk contact my assistant and I'll have em send u an autographed pic for my biggest FAN! (sic)''

Punk has now posted a video online telling the 22-year-old star he is ''not a man'' and issuing a challenge to meet him in The Ring with all proceeds from the bout going to a women's shelter.

Punk, 33, says: ''I'm a life-long, proud, drug-free straight edge individual so Chris and I come from two completely different worlds. I don't have a manager, I don't have a bodyguard, I don't have an assistant, I have no need for a PR team what to tweet or when to delete tweets and I don't hit women. Period. In my world women are to be revered and respected and I firmly believe that in this life there are consequences and repurcussions for people's actions and I don't think Chris has paid for what he's done. Picking up trash on the side of a highway does not make a mends for repeatedly striking a woman in her face and sending her to hospital.

''So if Chris wants to throw stones my way now I say that's fine lets put some gloves out and get in the ring and I will choke you out and I will make you feel as weak and as powerless and scared and alone as any woman who has had the misfortune of knowing a sad, cowardly, little boy such as yourself and all proceeds can go to a women's shelter of my choosing ... Chris Brown isn't a man and that's fine. I just know that someday, somewhere somehow, somebody will put Chris Brown exactly where he belongs and that obviously doesn't have to be me I would just really like it to be.''

Chris - who was sentenced to five years probation and six months of community service his violent attack - hasn't accepted the 'RAW' star's challenge but did mock his rival in another series of tweets.

He wrote: ''@cmpunk the video u just posted was cute! It's so funny how defensive u are.

''And the fact that I really don't know who you are and could give a shit is the funny part!