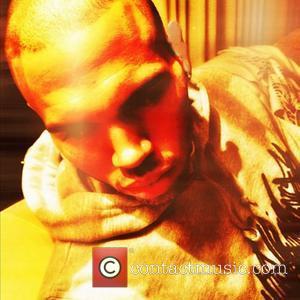 Chris Brown celebrated the release of his new record 'Fortune' this week, by partying in Los Angeles with British football star Wayne Rooney. The rapper received two bottles of champagne from the Manchester United star as they partied in the AV nightclub, before spending the rest of the evening at adjoining tables.
Rooney, 26, was living the high life in Los Angeles with fellow footballers Ashley Cole and Didier Drogba, though extended a hand of friendship to Brown, whom he is known to be a fan of. After being introduced to the singer's currently girlfriend Karrueche Tran, the group partied together - though there were no fisticuffs this time. As has been widely reported, Brown and his rival Drake's entourages came to blows at the Wip nightclub in New York last month, leaving several injured, including the basketball star Tony Parker. It was a far friendlier night with the Premiership football stars though, with Brown finally leaving the club at 2am, and Wayne calling it a night shortly afterwards. Both stars missed the eventual arrival of party girl Lindsay Lohan, according to the London Evening Post.
Brown's latest album 'Fortune' has taken a panning from critics, with the UK's Observer newspaper bluntly asserting, "This is not a great album". Nevertheless, the record is likely to dominate the Billboard charts, continuing Brown's surprising comeback following his assault of Rihanna in 2009.