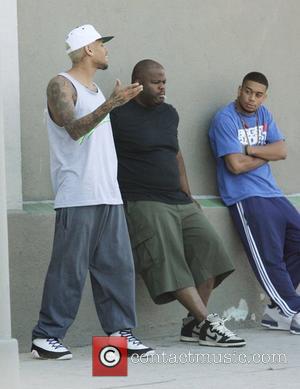 Chris Brown is the latest celebrity to apologise to the gay community after using a homosexual slur in anger. On Tuesday (21st June 2011), the singer lashed out at several photographers, deeming they had tipped off parking-enforcement officers about his illegally parked car.
According to Tmz.com, Brown has vented his angers at the paparazzi, branding them "gay" for alerting the authorities to his vehicle. After news of the comments began circulating online, the R&B star was heavily criticised by The Human Rights Campaign who said "invoking words to demean gay Americans is just plain unacceptable ... Brown should know better". The singer made an apology via his Twitter account on Wednesday evening, saying, "I have total respect for Gay community and my intention was not to insult anyone in it". The comments come just days after comedian Tracy Morgan returned to the scene of his infamous Nashville gig to apologise for his anti-gay rant. During his recent stand-up performance, the '30 Rock' star had allegedly claimed he would stab his son if he began acting homosexual. He also told the sold-out audience that being gay was something learnt from the media. Last week, R&B star Cee-Lo Green was criticised for posting a tweet in response to a negative review by critic Andrew Swensson, writing, "I respect your criticism, but be fair! People enjoyed last night! I'm guessing you're gay? And my masculinity offended you? Well f*ck you!".
Chris Brown has been confirmed as a performer at this week's Bet Awards. Other acts scheduled to make appearances include Alicia Keys, Jill Scott and DRAKE.