Chris Brown and Karrueche Tran have fuelled speculation they are back together after being pictured being openly affectionate at the weekend. 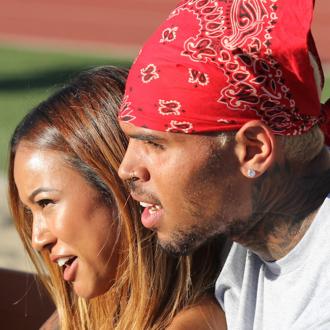 Chris Brown and Karrueche Tran have fuelled speculation they are back together.

The on/off couple - who were believed to have ended their three-year relationship for good earlier this month - were spotted together at a charity football game in Los Angeles on Saturday (16.08.14) and seemed more in love than ever.

Ahead of the game, Chris wrote on Instagram: ''It's going down! Team Breezy vs. Quincy [Jones'] team (sic)''

The brunette beauty was seen cheering on the 'Turn Up the Music' singer from the sidelines, before they embraced on the field and were openly affectionate as they left the game.

Later in the evening, the 25-year-old singer posed for a selfie with the 26-year-old model as the drove through Los Angeles.

Their date day comes just over a week after it was claimed Chris dumped Karrueche because she was an ''opportunist.''

A source said recently: ''He found out she was texting and sending photos to other guys while they were together.

''He was also furious she did interviews for her clothing line and talked about their relationship.''

It was previously claimed Karrueche dumped the 'Loyal' hitmaker because he liked two fan photos on Instagram of himself and ex-girlfriend Rihanna - who he has been frequently re-linked with during his off periods with the model - together and is too ''immature'' for her.