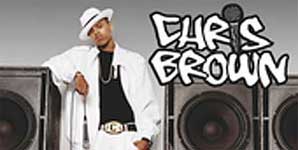 What is it with Hip-Hop and R&B artists trying to claim royal status? Is it not abit, well narcissistic? Granted, there is no arguing that Mary J is a Queen, Jigga still holds the right to dust off his crown whenever out of 'retirement', and dare I say it, even Usher can strut confidently around his kingdom without fear of being dethroned. However, forgive me for not being instantly convinced by every young singer coming out claiming to be a prince or princess of__________ (fill in the blank).

That was until…Chris Brown stepped forward. The 6'1 cutie, hailing from the small town of Tappahannock, Virginia, is creating a storm off the back of his continuously played up-tempo first single "Run It" produced by guaranteed hit-maker Scott Storch, featuring rapper Juelz Santana. With a mature, yet raw singing voice for his 16 years and impressive dancing skills that would make Timberlake really re-think his own. Chris Brown is pure talent.

On his self-title debut CD, we hear the thoughts in a teen's narrative of parties, activities at the mall and the conquest of ladies hearts. Readily providing his boyish bravado in "Ya Man Anit Me", Chris slams the competition by taking a swipe at the nesserary skills a young man needs to get his girl, teasing 'He anit fly, he don't even drive'. (Cough), neither do you Chris!? Its cool, I'm sure a chauffeur driven limo still puts you ahead of most, and with the bold rundown in "Gimme That", of his other desirable credentials that even a girl 3 years older is sure to be impressed by, Chris obviously feels top of his game.

And it is no wonder that Chris can give this slightly braggadocios talk, as he has already graced the prestigious cover of one of black music's top magazines, VIBE. Although it has not gone without comment, as to whether it is too soon for such credit, Chris proves with track highlight "Seen the Light", story depth with grown-up musical backdrop, that he has more to offer then the girls, girls, girls accolades. But, come on, while only 16, why not have fun, tackling the issues of puppy love displayed in "Young Love" which samples perfectly Blue Magic's '70s classic "Slide Show" and the harmoniously pleasing "Yo (Excuse Me Miss)".

It's too obvious to make comparisons to other all – singing, all - dancing R&B/pop stars, so I won't. I will just say that this is indeed a good, consistent album and not just for the adolescence, with the maturity of most of the songs, grown folk will be interested too. And just maybe, we might have to make way for another monarch.