Tweet: "In the studio singing the last song I'll ever song (sic) for glee on my birthday!" Chord Overstreet has mixed emotions as he wraps up his time on hit Tv show Glee on his 26th birthday on Tuesday (17Feb15).

Fact: It was a GLEE-filled concert for Demi Lovato on Tuesday (11Feb14) as her co-star on the hit series, Chord Overstreet, joined the singer on stage during her Neon Lights tour in San Jose, California. The hunk played an acoustic guitar while Lovato belted out her song, Made in the Usa.

Tweet: "Wow!! My house in nashville (sic) just got struck by lightning. Blew up our chimney! Holy smokes! #struckbylightning". Glee hunk Chord Overstreet is experiencing some dangerous weather in Tennessee.

Tweet: "My life is now complete! I had a Michael Jackson dance off last night w Chris Tucker at the sag awards. billiejean". Glee star Chord Overstreet got competitive with the Rush Hour funnyman at the Screen Actors Guild Awards on Sunday (27Jan13).

Tweet: "In bed sick. Someone make it go away". Glee star Chord Overstreet is feeling sorry for himself as he battles illness.

Tweet: "Guess one of my songs leaked. Still working on the record, hope you guys like!" Glee star Chord Overstreet brushes off the unauthorised leak of his debut solo single, Beautiful Girl. 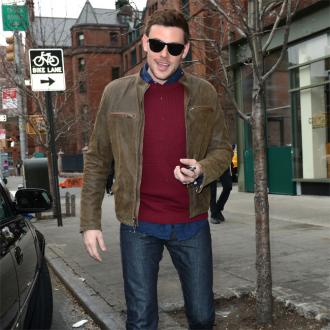