The video for Rhine Gold sees the camera filming a Danish manor house, from a distance away. We start heading for the manor, passing sinister, jagged trees, as the song starts and soon pass through the doors to see Choir Of Young Believers playing Rhine Gold as the sun sets.

Choir of Young Believers formed in 2006, with a non-changing line-up: Jannis Noya Makrigiannis; Jakob Millung; Cæcilie Trier; Lasse Herbst; Casper Henning Hansen; Bo Rande and Sonja Labianca. Their debut album, This Is For The White In Your Eyes, was released in 2008 and was nominated for six Danish Music Awards. In the end, the band won Best New Act. After performing at SXSW in 2009, Choir of Young Believers were subsequently signed to Ghostly International. 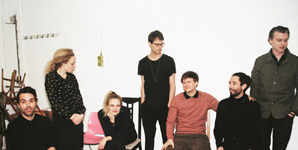