Chloe Moretz is too famous for Hollywood boys

'Kick-Ass 2' star Chloe Moretz insists there are not enough famous young actors in Hollywood to play her love interest. 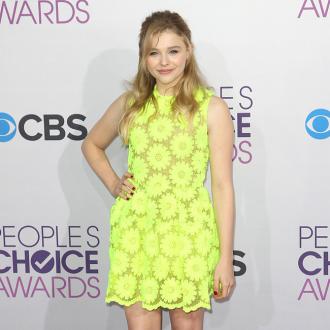 Chloe Moretz says ''it's really hard to find boys'' in Hollywood, as they not on her level.

The 'Diary of a Wimpy Kid' actress doesn't think there are enough famous young boys who are grown up enough to play her love interest.

She told InStyle magazine: ''There are a lot more famous young girls out there, like me and Elle [Fanning], Hayley [Atwell] and Dakota [Fanning]. ''But the young boys, it's like they're all there but they're not there yet.

''I'm attached to a couple of projects where I'm up with a boy role. So now it's about finding someone to do chemistry reads with and who I connect with.''

When it comes to older actors, Chloe has her eyes on Ryan Gosling as a potential future on-screen love interest, joking: ''I need to do a movie with Ryan Gosling then my friends would be so happy with me.''

The 16-year-old - who is starring in forthcoming films 'Kick-Ass 2' and a remake of Stephen King's 'Carrie' - admits finding love off-screen is just as difficult.

She said: ''You think, 'Who is out to deceive me?' That's hard, especially growing up and liking guys. Is this person trying to be in my life because I'm famous? You can't just like someone. They might be using you.''

While Chloe admits she has never been in love as it ''scares'' her after watching friends ''get messed over so dearly'', her 52-year-old 'Carrie' co-star, Julianne Moore, often lends her dating advice.

Chole explained: ''[Julianne] says, 'Look just be careful. Trust your judgment but don't get in too deep sometimes'. When you're young and you fall in love, you don't know what's happening.''