Chloe Moretz says she danced to ABBA whilst filming 'Carrie' in a bid to ''cheer'' herself up after shooting scary scenes . 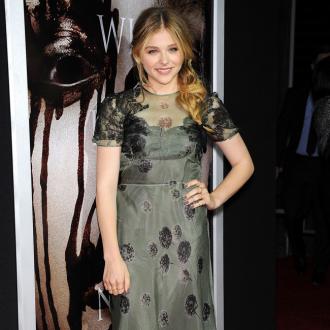 Chloe Moretz says she danced to ABBA whilst filming 'Carrie'.

The 16-year-old actress revealed she liked to ''cheer'' herself up after shooting scary scenes in the remake of the 1976 supernatural horror film by listening to 'Dancing Queen' by the iconic Swedish pop group.

Chloe insists she wasn't phased by the gory scenes when playing Carrie, a young girl who seeks bloody revenge on school bullies after learning she had telekinetic powers.

She told The Daily Star newspaper: ''To be honest, I just like dark characters,

''When I was doing Carrie, my mum caught me on video on the kitchen table, still in my blood-soaked robe, jumping around to Dancing Queen.''

Chloe claims she doesn't like to play happy characters because she finds complex roles more challenging.

She added: ''If I play a happy girl with a happy family and a happy life and like me, it isn't acting.

''I like playing characters who deal with problems that are much darker than what I deal with. It's like my therapy.''

Chloe will star alongside Julianne Moore, who plays her on-screen mother, in the film-adaptation of the horror movie based on author Stephen King's novel, and admits she found the prospect daunting.

She added: ''What was terrifying to me was doing justice to a Stephen King novel, that's what I found nerve-racking.''

'Carrie' is out in UK cinemas now.