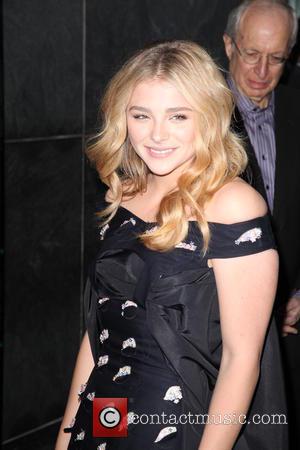 Picture: Chloë Grace Moretz - Stars were snapped as they took to the red carpet at the Screening of action, crime thriller 'The Equalizer' in New...

Actress Chloe Grace Moretz had an awkward moment on live Tv in America on Monday night (22Sep14) when a fan called in to a rowdy talk show to ask her if she is more than friends with David Beckham's son Brooklyn.

The 17-year-old actress has been linked to the eldest Beckham boy, 15, for weeks, but she has dodged the question at every opportunity.

However, when a fan called in to Watch What Happens Live and asked her to confirm or deny the rumours, the Kick-Ass star squirmed in her seat and said, "That's naughty, that's a naughty question."

Moretz added, "I don't know, he's a very good guy, he's a good person. I enjoy hanging out with him."

Host Andy Cohen then asked the actress if she had met Brooklyn's fashion designer mum Victoria Beckham, to which she responded, "She's an amazing person; I really admire her work ethic. I love her (clothing) line. As a family, they're awesome people."

When asked if she gets a discount on Beckham's clothing, Moretz chuckled, "I haven't tried yet. I'm gonna try that this week."