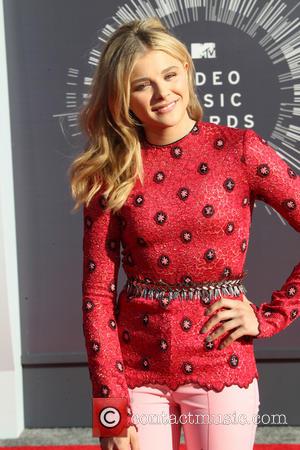 Actress Chloe Grace Moretz and America's First Lady Michelle Obama have teamed up to star in a spoof of dystopian film Divergent to promote healthy eating.

The Carrie star is featured as the lead role in a trailer for a fake film titled Snackpocalypse for comedy website Funny or Die.

Similar to the blockbuster action film starring Shailene Woodley, Moretz is a student unlike the others at her high school as she chooses to snack on fruits and vegetables instead of junk food.

Teen Wolf hunk Tyler Posey also joins Moretz as they survive on healthy eating while they watch the other students turn into zombies eating unhealthy food.

Obama, who is an advocate for exercise and healthy living, makes an appearance at the end, sitting on a couch with a couple of friends and eating a carrot.

She quips, "Don't you hate when trailers give away the whole movie? Can we just watch Frozen again?"

The First Lady follows in the footsteps of her husband U.S. President Barack Obama, who starred in a popular Funny or Die sketch with Zach Galifianakis earlier this year (14) for his series Between Two Ferns.