Chloe Grace Moretz thinks Victoria Beckham is ''an amazing person'' and admits she enjoys hanging out with the fashion designer's eldest son, Brooklyn Beckham, whom she is rumoured to have started dating over the summer. 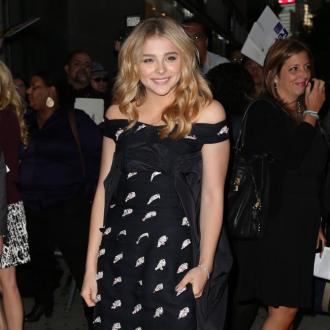 The 17-year-old actress, who is rumoured to be dating the British fashion designer's eldest son, Brooklyn Beckham, gets on very well with the 40-year-old star and her husband, David Beckham, and thinks they're ''awesome.''

Asked if she and aspiring footballer Brooklyn, 15, ''are more than friends,'' the 'Equalizer' star told Andy Cohen on 'Watch What Happens Live': ''That's naughty. That was a naughty question!''

When Andy suggested she was playing coy because she isn't ready to ''define'' their relationship, she responded: ''Maybe.''

Chloe also opened up about her respect for former Spice Girl Victoria.

She said: ''She's an amazing person. I really admire her work ethic. I love her line. As a family, they're awesome people.''

But she hasn't tried to take advantage of her friendship with Brooklyn by asking for discount or special access to Victoria's latest collection.

A source previously revealed that David, 39, and Victoria are happy their eldest son is dating Chloe, but always make sure there is a chaperone present when they spend time together.