Veteran Actress/singer Chita Rivera Found Herself Struggling For Words During A Meeting With Pope Francis Last Year (14) After A Rare Attack Of Nerves Left Her Tongue-tied. 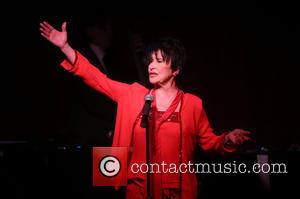 The Chicago star, 82, was granted a private audience with a priest pal in September (14) and she felt honoured to receive the Catholic leader's blessing.

She tells the New York Post, "Last September a priest friend arranged a small private audience - three people - with Pope Francis. I was the only one allowed in. I actually looked in his eyes and his hand touched mine. He gave me Communion...

"To get his blessing, be in his company, I know I've been blessed."

However, Rivera admits she stumbled over her words as she tried to speak to the Argentine pontiff.

She says, "I'm Dolores Conchita (her real name). Spanish like he is. We could have spoken in Spanish. He asked my name, and I was so nervous I could not get anything out of my mouth. I told him 'Chita Rivera', my stage name."