Chita Rivera's Musical The Visit Is Set To Close This Weekend (14jun15) After Going Home Empty-handed At The 2015 Tony Awards On Sunday (07jun15). 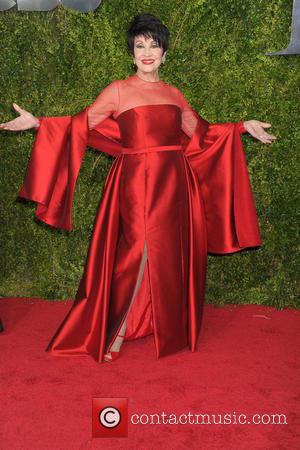 Producers of the show announced on Monday (08Jun15) that the final curtain will come down this Sunday (14Jun15), just two months after its opening.

The production, based on the satirical 1956 Friedrich Durrenmatt play, features songs by Cabaret duo John Kander and Fred Ebb and a book by acclaimed writer Terrence MCNally, but the show has struggled with mixed reviews and mediocre box office sales.

Rivera, 82, currently stars in the musical alongside actor Tom Nelis, who had to step in for original star Roger Rees after illness forced him to bow out last month (May15).

Rivera has received critical acclaim for her role, including the coveted New York Drama League's Distinguished Performance award, and was a frontrunner to win the Best Lead Actress in a Musical category at the Tonys. She lost out to veteran Broadway star Kelli O'Hara from The King and I.

The Visit was nominated for four other awards, including Best Musical, but that prize went to Fun Home.