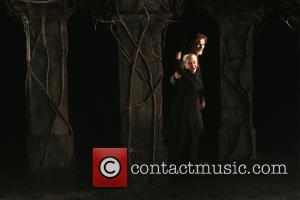 The pair recently co-starred as former lovers in Kander & Ebb musical The Visit - until the Welsh actor was forced to bow out of the production in May (15) due to illness.

It was subsequently revealed he had been battling stomach cancer and he passed away last week, aged 71.

Now Rivera has reflected on the sad loss in an emotional post on Facebook.com, revealing she had hoped to get to know her "new friend" better.

She writes, "The world has lost a great actor, gentleman and soul. I have lost a beautiful new friend, one I was looking forward to spending exciting valuable time with. I loved my new and eternal friend, and thank god for lending him to us.

Rivera signed the note "from Chita, your Claire", a reference to her stage character.

The marquee lights on Broadway will be dimmed in Rees' memory on Wednesday (15Jul15).