Chief Keef may not have been physically present at the festival but the performance was still ended prematurely by police.

Rapper Chief Keef made a very brief appearance via hologram at last night’s Craze Fest in Hammond, Indiana before the performance was shut down by police. The gig was meant to happen in Chicago but had been moved to Indiana after pressure from local authorities. 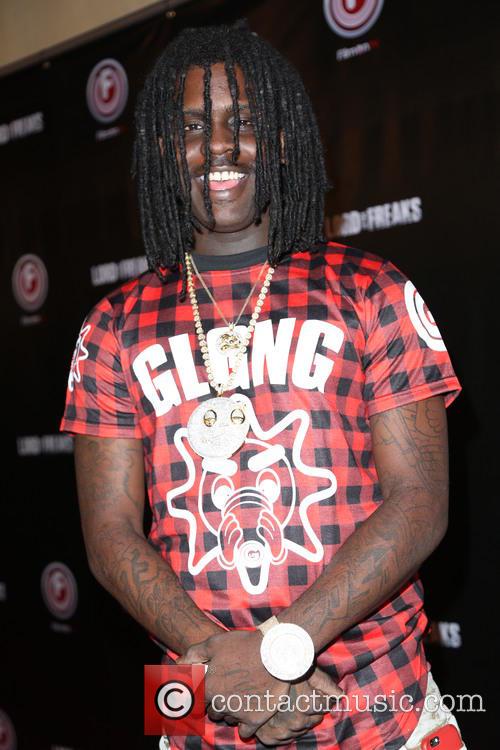 The gig was intended to help raise money for the family of toddler Dillan Harris who was killed earlier this month by a car fleeing the scene of a shooting that also claimed the life of Chief Keef associate Marvin 'Capo' Carr.

Chief Keef Threatens To 'Smack' Katy Perry (And Other Things)

Chief Keef was one delivering the abuse, though it was Katy Perry who ended up apologizing!

Keef caught wind of the jibe and resorted to a sickening verbal attack, tweeting, "Dat bitch Katy Perry Can Suck Skin Off Of my Di*k," before adding, "Ill Smack The Sh*t out her." Bizarrely, it was the pop star who ended up apologizing, replying "Mr. Keef! I'm sorry if I offended you. I heard a lot of people guesting on the song & didn't even know it was you in particular," in reference to the Wiz Khalifa and 50 Cent parts on 'Hate Bein' Sober.' She backtracked further, saying, "Actually... I'm a fan of your 'Don't Like' video tbh. I was really just having a general opinion on our generations desire to be constantly intoxicated... Believe me, I'm a lover not a hater."

No word on whether Keef accepted the apology, though he did re-tweet the message. A few hours later to he openly expressed his lust for NFL start Reggie Bush's fiancee Lilit Avagyan. Oh Keef.

Chief Keef spent Monday (May 20) night in a cell in Atlanta, Georgia, with the rapper being cited for disorderly conduct before being taken away. TMZ got to the root of his arrest today (May 21) by obtaining the 911 call made by the hotel security guard that called the incident in, with the justice-hunting hotel worker coming across not quite as cool as he would have hoped when the call was made.

TMZ have the recording available to listen to on their site, with the concerned hotel worker ringing up the police when he found out that Keef a his posse were "rolling marijuana" in his hotel room. The security guard went on to tell the 911 operator, "a bunch of gentlemen [are] rolling marijuana and smoking ... all in the room ... the room's filled with smoke."

The squealer sounds very shocked by the whole ordeal and can't quite believe what is going on, but he tries to relay everything that happened and why he feels it was an urgent matter that needed to end in police intervention. The security guard goes on to say, the hoodlums "may just bolt" at any minute, explaining his shock when he "announced myself as 'security' and they let me in the room as if it doesn't even matter!"

Chief Keef Arrested (And Released) For Disorderly Conduct In Georgia

The 17-year-old rapper spent the night in jail on a charge of disorderly conduct.

Rapper Chief Keef was in and out of custody on Monday (May 20) night, with the 'I Don't Like' MC getting put away by cops for disorderly conduct whilst in Dunwoody, Georgia. He was released a while after and understandably so he wasn't best pleased about the whole situation.

Keef was down in Georgia with fellow rapper Gucci Mane to film the visuals for Gucci's next single 'Darker'. The track was released earlier this month around the same time Gucci announced that he was signing the 17-year old rapper up to his Bricksquad 1017 recording crew. The filming proceedings must have gotten a little out of had though because the young rap protegé ended up in police custody by the end of the second day of shooting.

Chief Keef has garnered more attention from the police, less than a day after being released from prison.

Chief Keef really hasn't got this staying out of the prison thing worked out yet, has he? The 17-year-old rapper - real name Keith Cozart - was released from jail on Thursday after serving 60 days on a probation, though was under new scrutiny within hours of being a free man.

Keef was released following a brief court hearing, though caught the attention of the police after logging back into his Facebook account and taunting a Chicago street gang over the 2011 murder one of their members, according to the city's Sun-Times newspaper. "He's heating things up before he's even out," a police source told the paper of the posting.

Last month, New Beginnings Church Pastor Corey Brooks said he would baptize Keef upon his release from prison. "He is an entertainer, that is how he sees himself," Brooks said, according to the Huffington Post, "But at the same time, he has a God-consciousness. He is not some terror who is wreaking havoc."

It looks as though playing the bad boy rapper has finally backfired on Chief Keef, who pleaded with a judge to go easy on him on Thursday last week (January 17, 2013), the Chicago Sun-Times reported. The 17 year old was apparently tearful as he was sentenced to 60 days in a juvenile detention center, for violating his probation, on a gun conviction.

Keef made the slip-up when he conducted an interview with the Pitchfork music site at a gun range. Probably not the smartest thing he’s ever done. He also tried to convince the court that he’s really not as violent and murderous as he makes out in his lyrics and pleaded with the judge “I am a very good-hearted person… I am sorry for anything that I have done wrong. ... Give me a chance.” Judge Carl Anthony Walker was not impressed by the Chicago rapper’s pleas, however, and sentenced him to 60 days on the inside. In addition to revoking the probation for Chief Keef (real name Keth Cozart), which he received for pointing a gun at Chicago police officers, Walker also made him a ward of the state. This means that he was removed from the custody of an uncle and grandmother. This was deemed necessary in order to protect the public and because of his blatant disregard for the court orders.

On Twitter, many users of the social media site have been responding to the news with mirth, with one user, @Nigel_D commenting “I’m booking Chief Keef for an anti-gun rally” and another, more seriously, “To all you kids that look up to Chief Keef, there's someone by the name of Lupe that actually stands for something, search him up” (@AimanofArabia).

A mixed week for US albums releases; old classics given an airing, a major movie soundtrack launched and hip-hop arTIsts new and old having a stab at chart success. Currently, the top of the US album chart is dominated by Taylor Swift, who’s back at the top with Red, Wiz Khalifa, riding high at number two with O.N.F.C. and Rod Stewart’s festive compilation album, Merry Christmas, Baby.

Chief Keef Is A Wanted Man After Skipping Hearing