Smith Too Busy For Chickenfoot 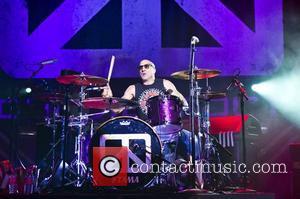 Rock supergroup Chickenfoot are preparing to hit the studio to record their second album without drummer and founder Chad Smith - because the Red Hot Chili Peppers star is too busy to join them.
Smith formed the group with former Van Halen stars Sammy Hagar and Michael Anthony and guitarist Joe Satriani, but the drummer has been forced to spend time away from Chickenfoot because of his commitments to the Under the Bridge rockers - and Hagar admits they may have to find a replacement.
Hagar says, "Chad's a problem, I'm gonna tell everybody straight up. To me, Chad is Chickenfoot. But the Chili Peppers have been writing for a year and they haven't even started recording, and I just don't see a window now.
"Once they start recording, Chad's never gonna be able to get a break, and then when they're done with that, they're gonna go out on the road for a year and a half. So, we really don't know what to do right now, but I think we're gonna probably play with a few different guys and see what happens."

Smith Too Busy For Chickenfoot