Chew Lips are set to release their new single 'Salt Air' on 13th July through Kitsune Records. Quickly becoming one of the names on everyone's 'not to be missed' lists, Chew Lips have impressed crowds up and down the UK, they group have played or are set to play all the major UKs festivals including a storming performance at this years Camden Crawl.

Their previous single 'Solo' was very different to 'Salt Air', Solo showed the East London trio's pop side whereas Salt Air is holds a darker heart. 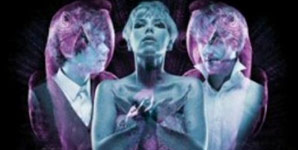