Since 1995, Chevelle have been grafting away with their trademark post-grunge/hard rock sounds. Despite being a major concern in their motherland across the pond, Chevelle just aren't a band that we Brits get, often dismissing them as trading on that knuckle dragging Nickelback thing that Americans seem to love but which we appear to have left in about 2002. In actual fact, what Chevelle have delivered on their seventh LP 'La Gargola' is, in places, a great deal more accomplished and more impressive than that. 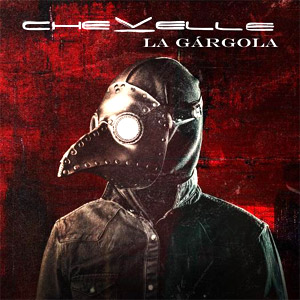 Opening with a sinister, rattling intro, 'Ouija Board' kicks off with a punishing, thrashy Helmet-esque riff before going almost stratospheric in the chorus with some Soundgarden style weirdness. As an opening track it does the job and lays down a gauntlet which, sadly, the rest of the album is not able to follow.

To be fair, there are some great moments here and there's barely anything that you could even call a 'bad' track, it is just that the lofty heights of 'Ouija Board' are never again breached. However, you get the huge choruses of 'An Island', the dissonant weirdness of recent single 'Take Out the Gunman' and the experimental, layered guitar assault of 'Jawbreaker' which all tick the boxes a hard rock act should tick.