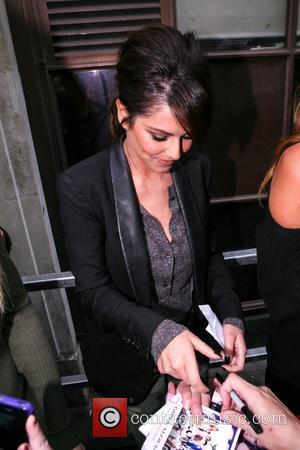 Cheryl Cole has joked that she regrets filming her new TV show Access All Areas because it highlights her "cringy" side. The ITV2 programme - which airs at 9pm tonight - features Cole's new boyfriend Tre Holloway and reveals how the pair got together.

The show was filmed during Cheryl's first solo tour though it's the scenes with backing dancer Holloway that will most interest fans of the Geordie star. According to The Metro, some scenes feature the pair "kissing and snuggling backstage" as well as "feeding each other sweets." Tweeting this afternoon, Cole said, "My Access All Areas behind the scenes tour documentary is on tonight 9 on Itv2 !! Who'll be watching ??? I literally had a friend of mine filming so that i would not feel like i had a 'camera crew' in my way and at times forgot myself." Though the show will no doubt draw huge numbers, the singer warned, "I have since regretted this decision at the number of times i cringed watching it lolololol..Oh well.. It is def Access All Areas. Up close personal and RAW hahaha." During a sneak peek of the show, Cole confirms her relationship with Holloway, telling the camera, "Tre is a dancer and he is my boyfriend. And the rest you can figure out for yourself."

The singer had every reason to be in a good mood today, having performed with Girls Aloud for The Queen at last night's Royal Variety Performance. The reunited girl group performed 'The Promise' on an evening that also featured the likes of Rod Stewart, Neil Diamond and One Direction.