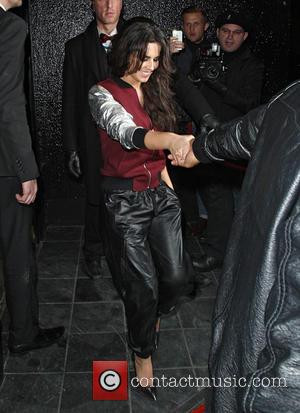 Cheryl Cole became a Christmas DJ for the night on Thursday (December 20, 2012), spinning records at London's Rose Club with boyfriend Tre Holloway. According to the venue's official Twitter page, Cole "set the club on fire" during their weekly Hip Hop night.

According to The Mirror, Cheryl rocked MC Hammer-style leather trousers with a baseball jacket, while Tre opted for a leather jacket and red sneakers. After their successful DJ set, the couple continued the party back home, cracking open a bottle of mulled wine. Posing with a lily (also the name of her assistant Lily England), Cheryl told followers, "Me, my Christmas jumper and my Lily hahaha !!!! #5sleeps" adding, "I bet you all thought it was @Lily_England didn't you ??? I'm sooo funny !!! Hahaha #YouLittleMugs LOL at myself#TooMuchMulledWine" Yes Cheryl, definitely too much mulled wine. Definitely.

The Girls Aloud star has enjoyed a pretty good 2012, after a disastrous 2011 that included being axed from The X Factor USA and ending a reported reconciliation with ex-husband Ashley Cole after he was linked to a string of women. 2013 is going to be a big one for the singer, who will perform with Girls Aloud on a sold out UK tour.