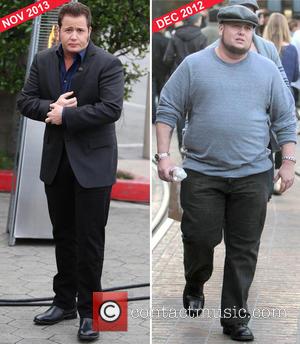 Picture: Chaz Bono - And he's a lot richer for his weightloss efforts - Bono's proud mum cheered on her son by handing over...

Cher's son Chaz Bono won't be feeding his face this Thanksgiving after losing a whopping 85 pounds (38.5 kilograms) on a diet plan set out for him by a group of Tv medics.

Check out the amazing pictures of Chaz Bono chatting with Maria Menounos on Extra.

The activist and reality Tv star kickstarted his health and fitness battle a year ago after tipping the scales at 250 pounds (113 kilograms) in November, 2012 - and he turned to the hosts of U.S. Tv show The Doctors for advice.

They put him on a strict diet and exercise plan and Bono returned to their show in February (13) 40 pounds (18 kilograms) lighter.

He has now doubled up his weightloss and he returned to the daily show recently and told his mentors, "My life feels completely different and I'm really grateful."

But the weightloss led to more surgery for Bono, who was born a girl and underwent a series of procedures to achieve his dream of becoming a man.

He tells news show Extra, "I had to have some excess skin removed. It's not fun but it was worth it."