Cher Lloyd stormed off stage halfway through her V Festival set in Chelmsford, Essex, yesterday (19.08.12) after being struck with a bottle of urine and a glass object. 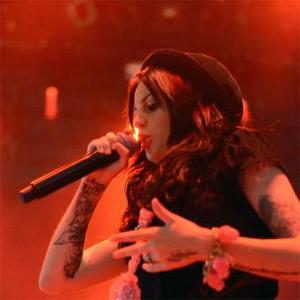 Cher Lloyd stormed off stage during her V Festival set yesterday (19.08.12) after being struck with a bottle of urine.

The 'Want U Back' hitmaker was singing her second song on the Arena Stage at the Hylands Park venue in Chelmsford, Essex when she was hit by the object, but after composing herself she later returned to continue her set before being pelted with more bottles and deciding to end her performance early.

When the 19-year-old brunette returned to the stage, she told the crowd: ''It's hard enough being up here, but it's not nice having bottles of p**s chucked at you.''

As well as being hit with urine, Cher was booed and had a glass bottle thrown at her by one reveller and she later took to her twitter account to thank fans for their ''nice messages'' but slam the few people who ''ruined'' her set.

But on Saturday (18.08.12) Cher performed at the V Festival in Staffordshire without incident and admitted she was ''looking forward'' to taking to the stage again at the Essex venue.

Following Cher's set in Chelmsford, Pixie Lott, The Happy Mondays and Nero all performed on the Arena Stage while The Killers closed the festival on the Virgin Media Stage.