The difficult to define or pigeonhole Chelsea Wolfe is one of the most intriguing artists of recent years. Her sound threads together the most esoteric, harrowing and cathartic aspects of drone metal, folk, goth and occasionally electronic music. She's done this across records such as 2013's 'Pain Is Beauty' and 2015's 'Abyss' by fussing dark, menacing soundscapes with bare, vulnerable sensibility. It makes for enticing listening and as she hits Manchester's Gorilla tonight, it proves it makes for mesmerizing viewing as well. 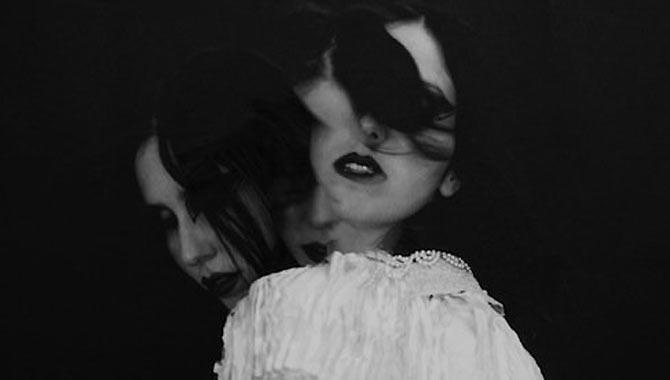 To kickstart tonight's ghostly atmosphere is doom metal outfit King Woman, who will either play it stampede heavy or hazily serene, but will at all times have guitars at the most distorted, the vocals wraithlike and have you in a chokehold.

True Widow are also fuzzy, but a lot more gentle. With the guitars drifting more and the vocals being more human, it makes for a more coma-inducing effect. You'll find yourself swaying and nodding along, but feeling like you're being put to sleep for an operation at the same time.

Chelsea Wolfe and her band hit the stage and you're under her spell for the next hour. From start to finish, her set feels like the scene of an art-house horror film, the way, not only her music is so tense and haunting, but the way the room is pitch black aside from flickering lights. There was a little bit of a leak from an air-conditioner on the ceiling, and it's such a minute detail, but it matched the setting so perfectly, you couldn't tell if someone had orchestrated it to match the rest of the Lynchian setting.

As for songs, Wolfe's combination of metal force fused with folk, bare-bone tenderness makes for a sensation that's akin to a knife dangling from a piece of string above you, the way it might not fall down at all, but it's presence makes you uneasy. You might tend to know fear and intensity from metal shows via slamming bodies and attacking musicians, but this is a psychological thriller as opposed to a gore fest, and it's a refreshing step away from the norm.

Whether it be the industrial stomp of 'Carrion Flowers' or the shard-like keys of 'Feral Love', there's always something to keep you on edge. 'Iron Moon' is where the most of a straight-up folk song emerges, but it has to break out of sluggish, doomy tones first; before Wolfe's delicate vocals bring things to a halt, only to then soar, whilst she sings of her heart being a 'tomb' and an 'empty room' for a moving effect.

The crowd was largely made up of metalheads tonight, who were headbanging to ferocious drums or the battering guitar stabs. However, if you were to teleport a bunch of folk fans or fans of gentle music in general, you'd struggle to believe that they wouldn't enjoy it also. They'd perhaps raise their eyebrows at certain aspects, but because Wolfe is equally compelling with her tender, human moments as she with her beastlike malice, you know they would fall for her sound just as much as anyone did tonight.

This was such a beautiful gig to behold. Chelsea Wolfe is an absolute master at blurring lines between the genres she chooses to play, but you don't truly know how effective that is, until you see it live. You could feel like you'd been whacked with a sledgehammer and you could feel like shedding a tear. Nights like this are rare and to be cherished, so don't let this incredible artist pass you by.