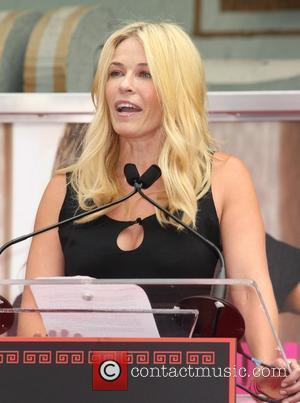 Picture: Chelsea Handler Jennifer Aniston is honoured with a Hand and Footprint Ceremony outside Grauman's Chinese Theatre, while her boyfriend looks on from the front row...

Rapper T.I. had U.S. TV viewers in giggles on Tuesday (25Oct11) after poking fun at comedienne Chelsea Handler and her brief fling with hip-hop star 50 Cent during an appearance on her talk show.
Handler was first linked to the In Da Club hitmaker last year (Oct10) when they were photographed enjoying a night out together, but the stars dismissed talk of a budding romance.
She finally came clean about her whirlwind romance with 50 Cent in May (11), admitting they dated "very casually", and T.I. couldn't help but joke about the odd pair when he joined Handler for a chat on Chelsea Lately this week.
Pretending to scold the rapper for using the word 'lately' while discussing another topic, Handler said, "Don't use my last name like that...", prompting T.I. to retort, "Your last name isn't Lately by the way, Chelsea... I thought your last name was Cent. I thought it was Chelsea Cent!"
But a surprised Handler laughed off the quip, responding, "No, that's not true. 50's last name was Lately for a while. But then we changed it back!"